Andrew first slipped when he thought that his money was sitting in his bank “not doing much,” feeling lonely, and clubbing with Ralph, “a trust fund baby with big appetites.”

Andrew also discovered he was making what researchers characterize as apparently irrelevant decisions – tiny movements back to his old behavior. He decided to club with Ralph even though he knew it was a probable downfall. There’s the triggering cognition (money wasting away), behavior (clubbing), feeling (loneliness), and relationship (Ralph and other big spenders).

Now, turn those triggers around and phrase them as the healthy opposites. Thinking that saving is wasteful turns into security about protecting his future; rationalizing a return to clubbing converts to thinking about ways in which he can advance his career by spending time elsewhere; feeling lonely becomes scheduling fun and friends; hanging with Ralph transforms into socializing with financially prudent friends; and so on. Those form the basis for your slip plan – what to think, what to do, what to feel, and who to do it with – the next time you slip. 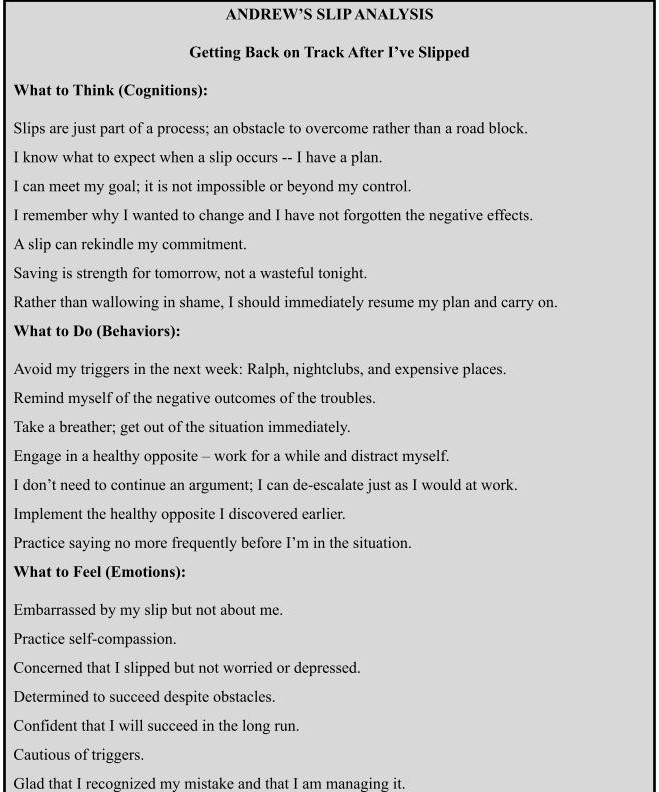 How can having a Slip Plan help get back on track after a slip?